Over the quarter, it’s become clear that there are many Asian Americans making music, but it’s always been difficult for them to find recognition. Racial biases and stereotypes create barriers for Asian American artists, who are seen as unmarketable to the average American consumer. This didn’t stop Asian American artists from making music. However, they were often unable to use mainstream methods of distribution, which in turn made it difficult to find Asian American music as a consumer. Music production and distribution today have changed for the better, and it appears that it would also be easier to discover Asian American music. But the emerging methods of music recommendations, which will likely drive music discovery and taste in the coming years, are inherently biased.

Our discussions about online platforms such as YouTube have often centered around the agency and freedom that they can offer artists. They have eliminated barriers of distribution for musicians, directors, comedians, and all types of content creators, and in doing so, enabled Asian Americans to find a place in the entertainment industry. However, in addition to the platforms as a means of presenting and distributing content, it’s worth considering the underlying algorithms that drive searches and recommendations. Simply considering the platforms alone fails to account for how people interact with these interfaces and consume media — it’s likely that lots of YouTube’s traffic is driven via related videos. These algorithms are designed to provide a personalized experience in order to best fit the user’s taste, introducing a paradigm shift in how music is discovered. Taking a computer-first approach to recommendations is fundamentally different than traditional strategies in this space. Unconcerned with preconceived notions of taste, machine learning algorithms construct specific taste profiles by deriving meaning and patterns from music.

In November 2015, Chris Johnson, an engineering manager at Spotify, gave a talk about how Spotify’s machine learning algorithms generate their “Discover Weekly” playlists, and it offers some insight into what informs these models. The intention of playlists and recommendations such as these is good-natured. By using machine learning, it should be possible to generate playlists that are solely influenced by the user’s taste. Spotify has sponsored playlists, but Discover Weekly is exempt to any external influence by record labels or artists. Furthermore, the metrics for these models are based on whether the user enjoys the recommendation. One way that the algorithm, a convolutional neural network, learns about taste is by analyzing audio files. Given millions of audio files for training, the word used in industry to describe the initial learning process, it constructs filters that encode meaning. These can be as granular as recognizing vocal thirds or vibrato singing, but it also builds higher level filters, often similar to human-constructed genres, such as deep house and Chinese pop. This approach is a novel way of classifying music, but more importantly, it’s fair. By only analyzing the audio file itself, it is not biased. 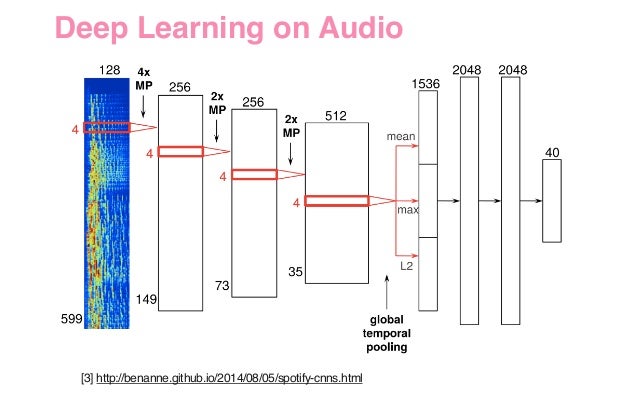 In theory, this rather scientific and objective approach benefits Asian Americans and any other artists who struggle to be found, but other factors weigh into the construction of these models. One of the most reliable ways to build playlists is to find similar users and select their favorite music.  Taste in music is complex and often not solely about the music itself, and using other people’s taste profiles takes this into consideration. While this generates good recommendations, it reinforces existing taste profiles. For the most music, this isn’t necessarily a problem, but Asian American music has developed differently. Especially recently, many Asian American musicians on YouTube contribute to each other’s channels and have cultivated audiences who are fans of many Asian American artists. These common viewing and listening patterns have been picked up by recommendation algorithms. It’s a somewhat contrived example, but if you start a new YouTube or Spotify account and listen to artists like Dumbfoundead and Jay Park, who make music in English, the generated recommendations are various other Asian and Asian American artists. The algorithm recognizes that fans of Asian American artists tend to seek out other music along racial lines, and in that case it’s helpful. However, this places it further in a niche that’s disconnected from the rest of the music world.

It’s hard to predict the consequences of this phenomenon, but it clearly maintains the same barriers of distribution that Asian American artists have faced in the past. By catering to their existing audiences, it’s easier than ever for fans to find their music. For new fans though, it may become increasingly more unlikely that they discover Asian American music, both because they will be encouraged to maintain the same listening patterns and because it’s unlikely that recommendation systems will show any Asian American music. Just like how Asian Americans can be treated as an Other, machine learning algorithms will continue to consider Asian American music as a separate genre based on race.