I grew up idolizing artists that didn’t have my hair, my eyes, my skin tone, my culture. I grew up loving artists that were accepted by the cultural hegemony this society has cultivated because they are white, beautiful, young, etc.

I came to this class knowing (maybe) what K-pop is and thinking I’d learn some more about Asian Americans in the industry, because I could count the artist names I knew on one hand. But what I ended up getting out of the course was an understanding of how racialized, ethnic people operate within and around the dominant culture that threatens to suppress us, and how we rise out of it through art.

Asian American music is a question of authenticity, of success, of how “Asian” versus how “American” it is, and much, much more, but what I found was that it’s more a question of radicalism –– do you, as an artist and/or as an Asian person, understand both what’s oppressing you and stopping you from being fully “authentic” and how to act with deliberateness to subvert it?

Through my three blog postings this year, I think I’ve grown to understand this idea more, both in terms of the music itself, but also as a listener and Asian American. I’ll start with the music.

In my first blog post, I explored how Asian male stereotypes are in conflict with the codified black, hypermasculine rap culture that dominates the scene. In the second, I took a look at how jazz music, born from the struggles of the black, oppressed working-class, has been adopted, falsely kreolized, into white high culture. And finally, I discuss love and radicalism and indie artist Mitski, and how love can foster resistance.

And though these all sound wildly different, each artist understands that they’re operating as outsiders within each genre, and that each genre has a specific history and certain expectations in which Asian Americans can’t gain footing in; rap and jazz have black history and culture in common, years and years of struggle and oppression and revolution that have shaped and formed their music into what it is today. Jazz, however, has split off a bit, as high culture has adopted jazz into its circle, while hip-hop remains a music of the people. Indie music, on the other hand, has lost a connection to blackness by defining “their aesthetics in opposition to what was perceived as the commercialized ‘pop’… namely genres that are associated with dance, blackness and the body” (Hsu, 37).

In all three cases, Asianness has no place; in the black and white binary, where does “yellow” fit in? Though I listen to rap, and indie, and have been exposed to jazz, I accepted the fact that I didn’t see any Asian faces in them. I was complacent but content, and didn’t feel the need to search further to see my own struggle and my own face reflected in the music I consumed. Complacency kills radical, resistent thinking, and at that point, I was appeased.

Each artist explored understands that they don’t fit, but rather than trying to be part of a narrative they don’t belong to, which would make for inauthentic music, they decided to go the radical route and provide their own commentary while putting their “Asianness” on display –– no hiding.

Ho asserts his Asianness by jazzing up traditional, popular Chinese songs, paying homage to his heritage with Asian sounds, and in the same album, shows how uncomfortable he is with the false kreolization of jazz as “high culture” with songs like “Spiderman Theme,” where the Spiderman theme song is re-created with jazz instruments.

Dumbfoundead makes it very clear he does not subscribe to the Asian stereotypes forced upon Asian men –– “Asian males are looked upon as timid or passive. And that’s not what I am, obviously, and that’s what I try to show that to the max.” And in many of his battles, brings up his Chineseness before his opponent can like he did against rapper Conceited:

He understands his place in the rap (battle) scene racially, but he’s here to battle, not to be written off simply because he’s Asian. 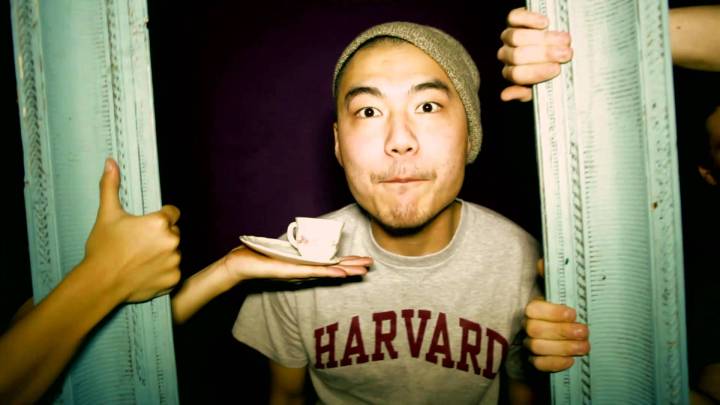 Mitski, though her songs and videos are highly technical works of art, they’re motivated not only by aesthetics, but race and struggle. “Your Best American Girl” is the best example of this –– though at first, she desires and lusts after the white man, she turns to her own self and in the end, it’s Mitski and her guitar and her love for herself showing through.

Mitski became more than just an artist for me personally, she was the one who pushed my understanding to where it is today. When we watched the videos for “Happy” and “Your Best American Girl,” I wanted to cry. It was art that summed up how I felt about my Asianness and about my femaleness in this world especially one that tells us that Asian women are either a Linda Low or a Mei Li; your only choices are to be servile or the exoticly oversexed. Mitski provides an alternative. I can love myself as someone in-between the binary, and both she and I have made the calculated decision to do so.

Purposeful action through art is the most important thing for Asian American music. Without it, we are playing into the hegemonic culture that invades our life and tells us that we should conform. With radical intentions, we make music for ourselves, for our struggles, for our own interests. That’s what drives Asian American music.

Sometimes I still get jealous of the blonde-haired and blue-eyed; but I have new idols now. And though I don’t listen to just music made by Asian Americans, and probably never will, I have expanded my horizons and explored amazing artists who I’ll carry with me. More importantly, I’ve learned that when you are a person of color in the U.S., everything you do is racialized, so to not act with intention and deliberateness is to stay complacent, playing into a liberal ideology that hurts you in the long run. When an artist creates with certain motivations, it links the listener and the artist in a way that extends beyond just enjoying music; the listener starts to consume it, become it, realize how they’re living a certain reality.

I grew up loving artists that didn’t necessarily have love for me. But now, I can say I love artists that I know have a place for me, whether they know it or not, because our struggles are interconnected and our oppression co-constructed, and so our liberation through their music must be too.

This is a text widget, which allows you to add text or HTML to your sidebar. You can use them to display text, links, images, HTML, or a combination of these. Edit them in the Widget section of the Customizer.
Loading Comments...
Comment
×
%d bloggers like this: