When it comes to the mainstream, Asian artists are often discriminated against in favor of non-Asian actors.  In the television and movie industry, most major roles are delegated to non-Asian actors, and the few Asian actors who are given roles on mainstream movies or shows are given very minor roles, often rife with stereotyping.  The same applies to the music industry.  It is much harder for Asian artists to find commercial success because in the eyes of the mainstream, they are seen as either appropriating other cultures or simply not having the same talent as non-Asian artists.  As a result of this bias towards Asian artists, they must resort to other avenues of expression.  This is where YouTube comes in.  By allowing Asian artists to produce what they want to produce and directly sharing with the audience, YouTube has allowed Asian artists to find commercial success in an industry that is set against them.

When it comes to music, the same sort of discrimination that happens in the movie and television industries happens as well.  As a result, many Asian artists have resorted to producing indie music.  While producing indie music may be a way for Asian artists to hone their craft, it is not necessarily economically feasible.  In the Balance article, it talks about how the indie band Eraserhead had difficulties finding a record label to sign them because their music was not “pop enough.”  This creates a paradox in that if an Asian American band stays true to their indie sound, then they will have issues commercially yet if they try to appease record labels and make more “pop” music, they start straying away from the indie territory into the mainstream which comes with its own problems for Asian artists.

Due to this paradox, how do Asian artists find a way of still being able to produce what they want while at the same time finding commercial success?  Enter YouTube.

Gangnam Style is a prime example of how effective YouTube is in helping Asian artists find commercial success.  Forbes provides an extremely interesting graph which I have included here. 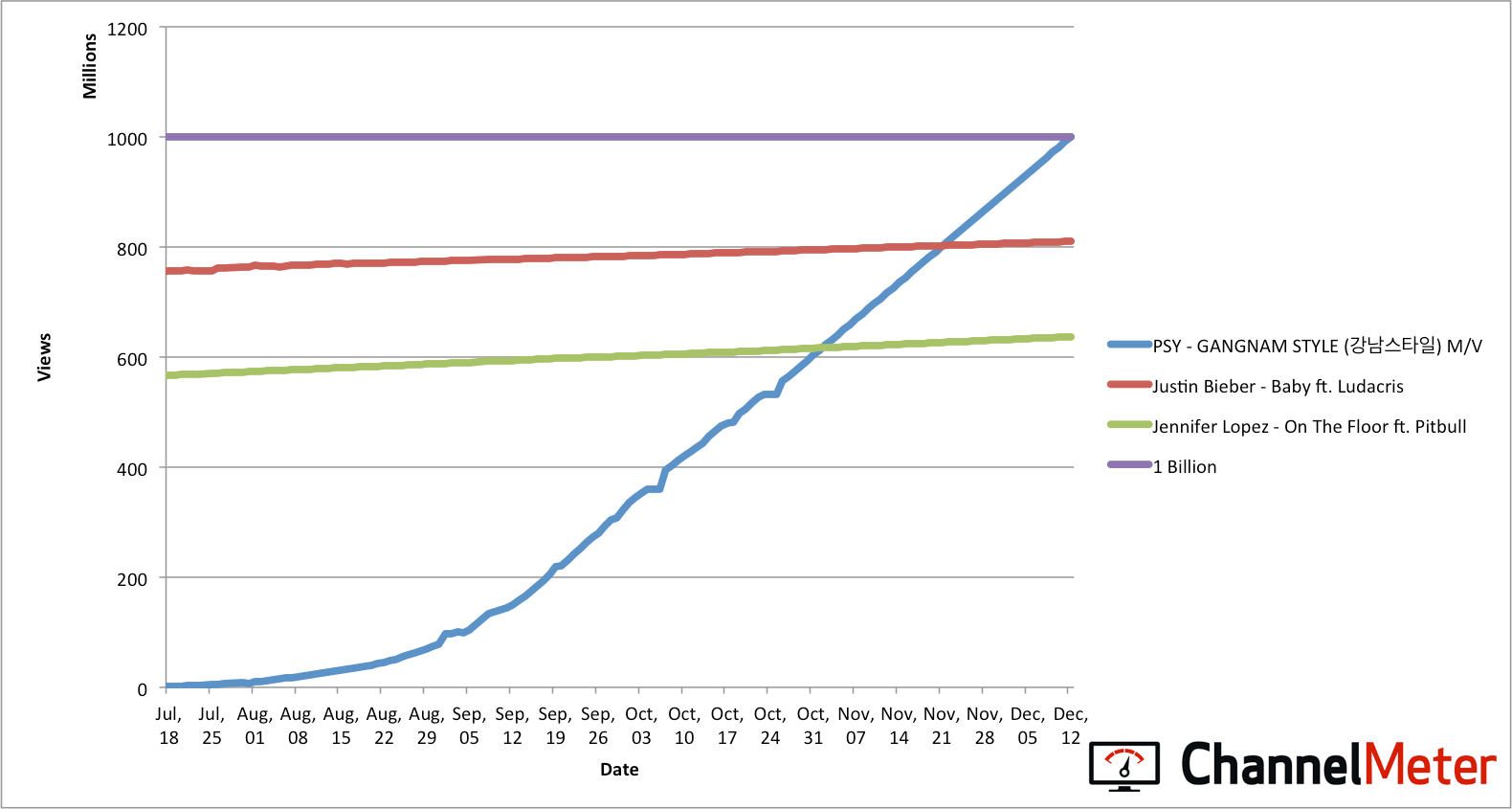 The graph compares Psy’s Gangnam Style to performances by Justin Bieber and Jennifer Lopez, two huge mainstream artists.  What’s interesting to note is the shape of the graphs.  Because Bieber and Lopez are both very popular mainstream artists, their music videos start off with a lot of views and slowly increases.  On the other hand, Psy starts off with almost no views and skyrockets past both Bieber and Lopez. According to Forbes, Gangnam Style is so commercially successful that the song alone has brought in over eight million dollars in revenue for Psy.  YouTube has allowed Psy to easily share his music with the people of YouTube, and with how global YouTube has become due to technological improvements over the years, that audience is quite a large one.

It is impossible to deny Psy’s success, but if YouTube was not there as a platform for Asian artists to share their music, then it is likely that Psy might not have been as successful as he is.  Going back to the Balance piece, one of the biggest obstacles the Eraserheads faced was the reluctance of record labels signing them.  Record labels were reluctant to sign them because they did not know how successful they will be with the audiences.  The same can be applied to Psy’s Gangnam Style.  Looking at the graph, you can see that for a period of many months, Gangnam Style failed to garner much attention.  Any record label looking at this would think that Gangnam Style is a failure and would stop promoting it.  Eventually it would have been phased out of the record label, and it would have failed commercially.  However, YouTube is not a record label, so Gangnam Style had plenty of time to garner attention and once it started, it snowballed out of control, propelling it to become the most popular YouTube video of all time and making Psy one of the most famous K-pop stars in the world. 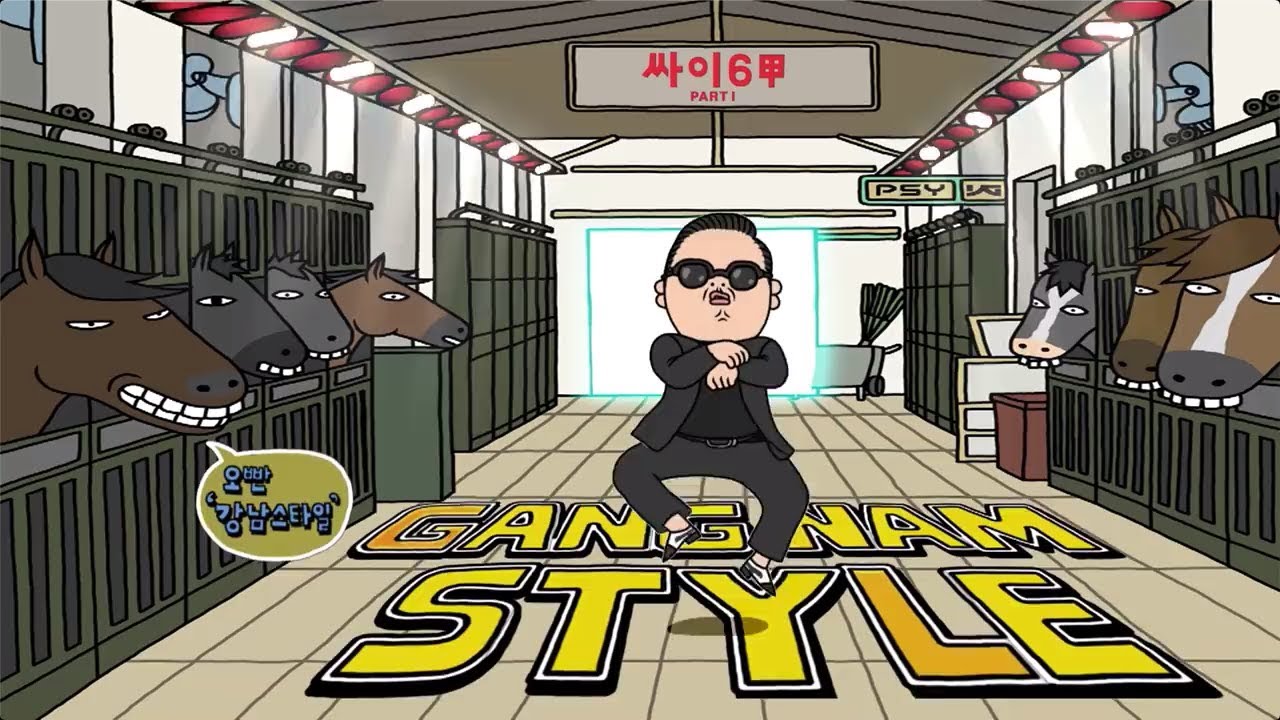 The biggest challenge Asian artists face when it comes to music is simply that the mainstream doesn’t even give them a chance before they are written.  Unless Asian artists produce music that will appeal to the masses, record labels have little incentive to sign them.  On the other hand, YouTube is a platform that allows artists to produce what they want to produce without having to worry about not pleasing the mainstream.  This gives Asian artists a sense of agency that is not attainable in the mainstream, and, if their content is good enough, commercial success rivalling that of mainstream artists.